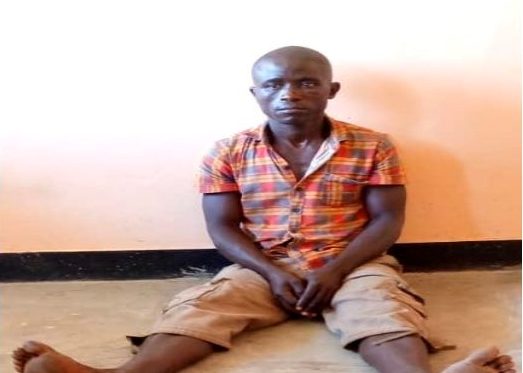 Kampala January 10, 2022 – Uganda Wildlife Authority has registered a breakthrough in the investigation and arrest of poachers suspected to have killed two Chimpanzees in Bugoma Forest and Kabwoya Wildlife Reserve with the arrest of the suspected ring leader Yafesi Baguma aged 36 years.

Yafesi Baguma is a known notorious poacher who has been at large following the arrest of his colleagues last month. He has been on the wanted list of criminals suspected to be part of the five people that killed two Chimpanzees about four months ago.

The operation mounted on 10th January 2022 that ended with his successful arrest followed an intelligence tip off and a combined operation by UWA rangers and Uganda Police. Baguma was found in Kakindo village in Kakumiro district, 104 km away from Kabwoya Wildlife Reserve where he had fled four months ago after killing the two Chimpanzees. Baguma had abandoned his home in Nyaigugu village, Kimbugu parish, Kabwoya Subcounty, Kikuube district.

On September 27, 2021, Baguma and three others; Nabasa Isiah, 27 years, Tumuhairwa John, 22 years and Baseka Eric, 25 years are suspected to have killed two Chimpanzees at Nyaigugu village, Kimbugu parish, Kabwoya Subcounty, Kikuube district. The three are on remand in connection with the same case.

Baguma is currently being transported to Kampala Central Station from where he will be arraigned before the Utilities, Standards and Wildlife Court and charged with illegal killing of protected species. UWA will continue to look for the remaining suspect so that all the five are brought before the law to answer the charges.