Toro Semliki Wildlife Reserve was established as a game reserve in 1926  and was among the first protected areas to be gazetted. The main reason was to protect the large numbers of Uganda Kobs in the area. It covers an area of 542 km2. It is located in western Uganda, within   Ntoroko and Kabarole districts.

Toro Semliki Wildlife Reserve enjoys a dramatic rift valley setting between the Rwenzori, Kijura escarpment and Lake Albert. The dominant vegetation type is the open acacia-combretum woodland and grassy savannah, interspersed with patches of Borassus palm forest, significant belts of riparian woodland along the main watercourses, as well as some extensive swamps towards Lake Albert. The reserve itself is topographically unremarkable, set at a relatively low altitude starting from around 700m above sea level, but on a clear day, the setting is truly awesome, with the sheer rift valley escarpment rising sharply from the eastern shore of Lake Albert, the 2500m-high Congolese Blue mountains on the western horizon and the mighty glacial peaks of the Rwenzori visible to the south-west.

There are four communities living around the reserve.

This community is situated in the south of the reserve, about 18km from Fort Portal town. The area is mainly inhabited by the Bakonjo who are traditional cultivators. The most important crops grown are maize, cassava, beans, soya beans, rice, and bananas some of which is sold in Rwebisengo and Ntoroko markets

This community is located on the west and northwestern edge of the reserve in the Semliki Flats. The community mainly comprises the Batuku (Batoro-Bahuma), who are predominantly pastoralists. The Batuku are believed to be descendants of the Abarusula who were the royal army of the king Kabalega of Bunyoro Kitara Kingdom

This community is situated at the south-eastern tip of Lake Albert between the estuaries of Wasa and Muzizi rivers. The area, covering approximately 4km2 has now been excised from the reserve and gazetted as a Wildlife Sanctuary to offer protection of any wildlife that interface in this area. The Ntoroko community depends mainly on fishing.

This community is located on the eastern escarpment of the rift valley. The majority of them are the Bakiga migrants who originally came to work in the tea estates in the 1960s. During the good economic times, tea provided a stable income. As the prices of tea deteriorated, they resorted to crop cultivation mainly beans, groundnuts, maize, and bananas.

Kampala Fort Portal via Mubende is 290km and Kampala –Fort Portal via Masaka-Mbarara-Kasese is about 465 km. Follow the route to Semuliki National Park from Fort Portal for the first 28 km before turning right at Karugutu trading center. The reserve boundary is 3km further on and the turn off to Semliki Safari Lodge is 26km further on just beyond the bridge over the river was. Branch to the right 3km to the Lodge. Lake Albert is further on 25km ahead at Ntoroko fishing village where UWA manages bandas, a campsite, and a canteen.

This walk takes 3 to 4 hours and is conducted near Semliki Safari Lodge where you will meet our experienced ranger guides. Key primate species on this walk include chimpanzees, Red-tailed, vervet, Black and white colobus monkeys, Baboons. Angulates encountered are Waterbucks, Warthogs, Bushbucks, Buffaloes, Uganda Kobs, and Elephants.

There are three tracks across the savannah grassland of Toro Semliki Wildlife Reserve. Smaller forest and larger savannah elephants are regularly seen, along with Buffalo, Waterbucks, Warthog, and Uganda Kob. With luck, you may even see leopard and elusive Bushbabies. Game drives in the wildlife reserve are done in the morning, afternoon, and at night. After dark, visitors may come across curious nocturnal species such as the white-tailed mongoose.

This takes 3 hours and it goes through a variety of habitats ranging from savannah woodland to riverine forest. Species encountered on this walk include; Ground Hornbills, Warthogs, Uganda Kobs, baboons, Black and White Colobus, and Vervet Monkeys.

The Karugutu Community Conservation Association (KCCA) is a community-based association whose objective is conservation education through Music Dance and Drama (MDD). They organize traditional dances for the visitors and they have a shop for handcrafts at the entrance of the reserve which they sell to visitors. Members of the KCCA perform for visitors

This is conducted on Lake Albert and the main attractions are Shoebills, African Pygmy Goose, Blue-breasted and Blue-cheeked Bee-eaters, and Blue-headed Coucal.

This is an ideal walk for birders that starts right at the Reserve Headquarters. It is a 7km hike that goes through a diversity of habitats including savanna, woodland, and a forest in the gorge. Common birds sighted include: Arrow marked Babbler, Tropical Boubal, Black-headed Bushrike, Luhdrers Bushrike and primates including Black and White Colobus, Baboons, vervets, and occasionally the Chimpanzees.

The Toro Semliki plain is predominantly grassy savanna and acacia-combretum woodland echoing Murchison Falls National Park at the northern end of Lake Albert. Stands of Borassus palms, lakeshore marshland, and broad river valleys filled with beautiful galley forest all add variety. Lake Albert lies outside the reserve but can be visited for canoeing and bird watching.

There are chances of encountering chimpanzees when you take a primate walk.

The reserve boosts 440 bird species including Red-necked falcon, Black-billed Barbet, and the turkey like Abyssinian Ground-hornbill. The Shoebill is usually sighted in the marshes of Lake Albert.

There is a campsite and budget bandas run by UWA on the shores of Lake Albert at Ntoroko, these have to be booked in advance. Meals are prepared at the canteen at the campsite.

Another campsite is at the reserve headquarters in Karugutu. Semliki Safari Lodge run by a private concessionaire The Uganda Safari Company offers an upmarket tented camp. 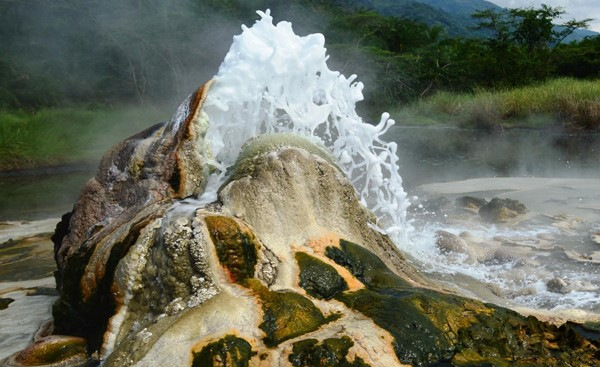